Are we playing “Taps” for Big Blue’s Mainframe? 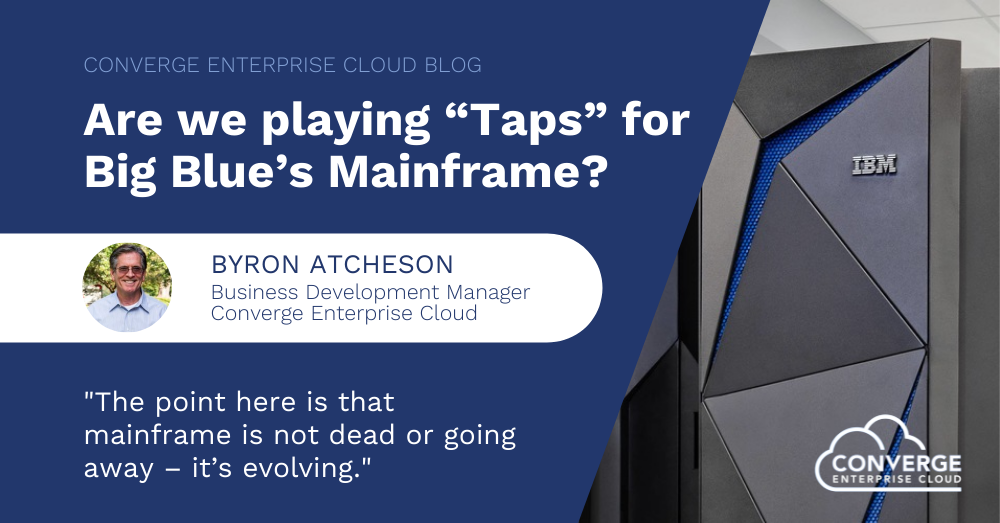 “Taps” is a bugle call played during flag ceremonies and at military funerals by the United States Armed Forces. For those of us who served, the bugle would sound at dusk indicating “The Day Is Done”. For over 20 years, most of us legacy IT professionals have heard that mainframe’s Day Is Done and that its usefulness may have passed. Most of the newer IT professionals have never seen a mainframe and, therefore, have not experienced its true capabilities. Even today, many mainframe users admit they plan to come off the mainframe in the near future, when in reality, there are more and new benefits for just staying put. The point here is that mainframe is not dead or going away – it’s evolving.

From a historic standpoint, the mainframe (sometimes known as Big Blue or Big Iron) has been around longer than most IT professionals have been alive. When IBM developed the first mainframe back in the 1950’s, it was considered to be a giant calculator. That calculator has now developed into a machine that can process billions of transactions in real-time. From a revenue standpoint, IBM states that the mainframe has generated more than $300B in sales for 2021 and is expected to continue for the foreseeable future.

How was the mainframe first intended to be used, and what are the benefits that we can take away from Big Iron? As stated earlier, the mainframe transformed from a calculator used by universities such as Harvard to a commercially available product sold to corporations, airlines, and the US government (Naval Ordnance Research Calculator). Today, mainframes are used worldwide for their ability to process billions of transactions per day for thousands of online users across every time zone. IBM states that the top 20 global banks use the latest z15 mainframe, and most Fortune 500 companies use the newest mainframe for their critical applications. In fact, Linux can now be run on the mainframe, giving expanded capabilities unheard of in earlier models. Benefits that Cloud providers and large storage applications can take advantage of. Applications such as Red Hat, IBM Cloud Paks and other open-source applications.

As we look back at the birth of mainframe, can we confidently say that it has reached its full capacity? I say no, it’s still evolving. Yes, some small and mid-size companies are adopting new methods, but the overall mainframe footprint across larger companies has grown from 5 to 15-20%, according to a Gartner report. IBM has also reported a growth of over 60% sales increase for 2020 with a continued growth swing for 2021. Are there still some challenges? Yes. The mainframe is a complex operating platform that requires a high level of engineering expertise to run. Additionally, the current teams of mainframe engineers are nearing retirement age and will soon be leaving a vacuum of experience. However, IBM understands this and has sponsored collegiate programs to fill in the gaps with the next crop of engineers. These engineers will be in very high demand and will have the opportunity to market their unique skill sets to these companies.

Bottom line, nobody is playing “Taps” for Big Iron in the foreseeable future.